My Cart (0) Total: €0.00
You have no items in your shopping cart.
Menu
Personal menu
My account
Filters
Search
Close
Menu

Origin of the Diamond 4Cs

References attributed to the GIA.edu 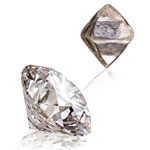 Every diamond is a miracle of time and place and chance. Like snowflakes, no two are exactly alike.

Until the middle of the twentieth century, there was no agreed-upon standard by which diamonds could be judged. GIA created the first, and now globally accepted standard for describing diamonds: Color, Clarity, Cut, and Carat Weight. Today, the 4Cs of Diamond Quality is the universal method for assessing the quality of any diamond, anywhere in the world.

The creation of the Diamond 4Cs meant two very important things: diamond quality could be communicated in a universal language, and diamond customers could now know exactly what they were about to purchase. 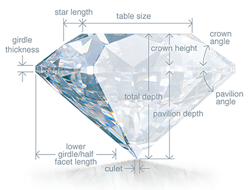 Cut quality is the factor that fuels a diamond’s fire, sparkle and brilliance. The allure and beauty of a particular diamond depends more on cut quality than anything else.

The GIA Diamond Cut Grading System for standard round brilliants in the D-to-Z color range is based on the assessment of seven components. The first three — brightness (the total light reflected from a diamond), fire (the dispersion of light into the colors of the spectrum), and scintillation (the pattern of light and dark areas and the flashes of light, or sparkle, when a diamond is moved) — are appearance-based aspects. The remaining four — weight ratio, durability, polish, and symmetry — are related to a diamond's design and craftsmanship.

In GIA’s system, each component is assessed individually, taking into account the relative importance of that component in the overall cut quality of the diamond. Each cut grade, based on a relative scale from Excellent to Poor, represents a range of proportion sets and face-up appearances. There are many different proportion sets that produce attractive diamonds.

For example, look at a side view of the standard round brilliant. The major components, from top to bottom, are the crown, girdle and pavilion. A round brilliant cut diamond has 57 or 58 facets, the 58th being a tiny flat facet at the bottom of the pavilion that’s known as the culet. The large, flat facet on the top is the table. The proportions of a diamond refer to the relationships between table size, crown angle and pavilion depth. It is important to note that a wide range of proportion combinations are possible, and these ultimately affect the stone’s interaction with light and how attractive the diamond is to the person viewing it.

While it is important to consider many components when assessing the overall cut appearance and quality of round brilliant diamonds, an individual's preferences also play a role. Because each cut grade represents a wide range of proportion sets, individuals have the freedom to choose which particular appearance they prefer within the grade range.

The diamond industry as well as the public can use cut along with color, clarity, and carat weight to help them make more informed decisions when assessing and purchasing round brilliant diamonds.

People often use the words cut and shape interchangeably. They think of cut as the shape or outline of the diamond, rather than the arrangement of facets needed to create an attractive face-up appearance.

Round is the shape used in most diamond jewelry. All other outlines are known as fancy shapes. Examples of traditional fancy shapes include the marquise, pear and oval. Hearts, triangles and a variety of others are also gaining popularity in diamond jewelry.

Diamond color is all about what you can’t see. Diamonds are valued by how closely they approach colorlessness – the less color, the higher their value. (The exception to this is fancy color diamonds, such as pinks and blues, which lie outside this color range.) Most diamonds found in jewelry stores run from colorless to near-colorless, with slight hints of yellow or brown.

GIA’s color-grading scale for diamonds is the industry standard. The scale begins with the letter D, representing colorless, and continues with increasing presence of color to the letter Z, or light yellow or brown. Each letter grade has a clearly defined range of color appearance. Diamonds are color-graded by comparing them to stones of known color under controlled lighting and precise viewing conditions.

Many of these color distinctions are so subtle as to be invisible to the untrained eye. But these slight differences make a very big difference in diamond quality and price.

Why does the GIA color grading system start at D?

Before GIA developed the D-Z Color Grading Scale, a variety of other systems were loosely applied. These included letters of the alphabet (A, B and C, with multiple A’s for the best stones), Arabic (0, 1, 2, 3) and Roman (I, II, III) numerals, and descriptions such as “gem blue” or “blue white.” The result of all these grading systems was inconsistency and inaccuracy. Because the creators of the GIA Color Scale wanted to start fresh, without any association with earlier systems, they chose to start with the letter D—a letter grade normally not associated with top quality.

Because diamonds formed deep within the earth, under extreme heat and pressure, they often contain unique birthmarks, either internal (inclusions) or external (blemishes).

Diamond clarity refers to the absence of these inclusions and blemishes. Diamonds without these birthmarks are rare, and rarity affects a diamond’s value. Using the GIA International Diamond Grading System™, diamonds are assigned a clarity grade that ranges from flawless (FL) to diamonds with obvious inclusions (I3).

Every diamond is unique. None is absolutely perfect under 10× magnification, though some come close. Known as Flawless diamonds, these are exceptionally rare. Most jewelers have never even seen one.

The GIA Clarity Scale contains 11 grades, with most diamonds falling into the VS (very slightly included) or SI (slightly included) categories. In determining a clarity grade, the GIA system considers the size, nature, position, color or relief, and quantity of clarity characteristics visible under 10× magnification.


How did the GIA Clarity Scale come about?

Like the color scale, GIA’s clarity grading system developed because jewelers were using terms that were easily misinterpreted, such as "loupe clean," or "piqué." Today, even if you buy a diamond in another part of the world, the jeweler will likely use terms such as VVS1 or SI2, even if her language is French or Japanese instead of English.

Diamonds and other gemstones are weighed in metric carats: one carat is equal to 0.2 grams, about the same weight as a paperclip. (Don’t confuse carat with karat, as in “18K gold,” which refers to gold purity.)

Just as a dollar is divided into 100 pennies, a carat is divided into 100 points. For example, a 50-point diamond weighs 0.50 carats. But two diamonds of equal weight can have very different values depending on the other members of the Four C’s: clarity, color and cut. The majority of diamonds used in fine jewelry weigh one carat or less.

Because even a fraction of a carat can make a considerable difference in cost, precision is crucial. In the diamond industry, weight is often measured to the hundred thousandths of a carat, and rounded to a hundredth of a carat. Diamond weights greater than one carat are expressed in carats and decimals. (For instance, a 1.08 ct. stone would be described as “one point oh eight carats,” or “one oh eight.”)

How did the carat system start?

The carat, the standard unit of weight for diamonds and other gemstones, takes its name from the carob seed. Because these small seeds had a fairly uniform weight, early gem traders used them as counterweights in their balance scales. The modern metric carat, equal to 0.2 grams, was adopted by the United States in 1913 and other countries soon after. Today, a carat weighs exactly the same in every corner of the world.